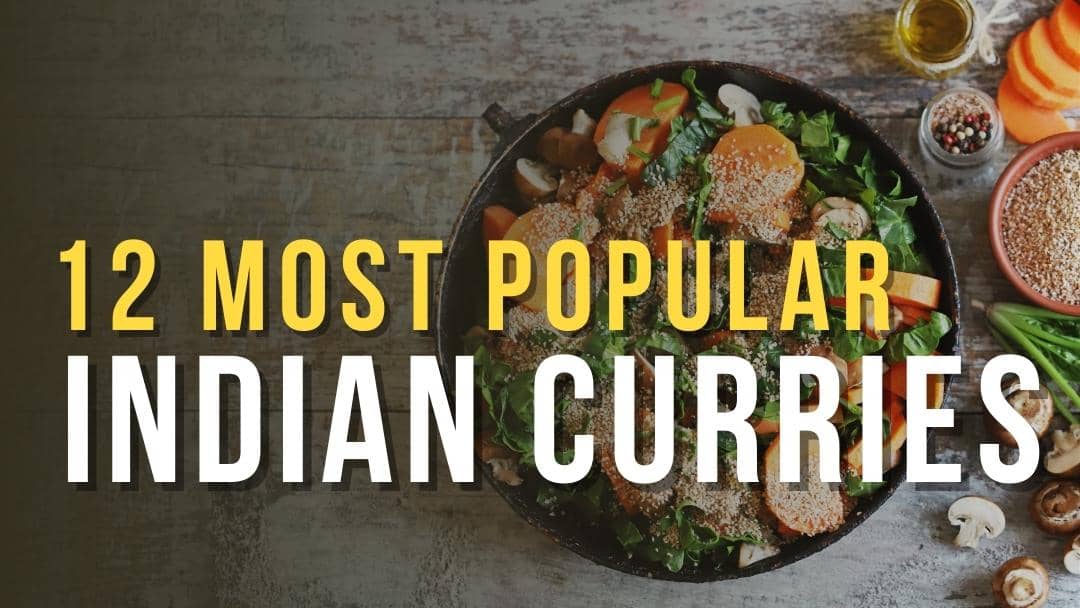 There are different types of curries or say gravylicious Indian recipes just waiting to be explored. Many Indian curries are thought to be spicy and filled with the heat of chilies, but did you know that India has a lot of sweet and savory curry dishes as well. Here is a list of the most popular Top 12 Types of Indian curries that you can try to start your journey! Be it vegan, vegetarian, or just a meat eater, we have something for everyone!

Flavored heavily with garlic, ginger, and aromatic spices like clove, bay leaves, cardamom, and cinnamon, the Lamb or the Mutton is put into a thick gravy. The pieces are sometimes loathed with yogurt and onions before being added to the gravy mixture.

Chicken Korma is a Mughal-inspired Indian dish that can be prepared by adding vegetables and chicken in a pot and braising them together, making them tender enough to incorporate all the Indian Spices. In a Korma, the Cardamom and Cinnamon play a major role in contributing to the dish’s flavor. Mixed together with butter and cream, along with yogurt-marinated slow-cooked braised meats, kormas are an Indian Food dish with zest without the burn.

Like Korma, Lamb Pasanda also contains ground almonds and cream but the main difference between the two is that the Lamb Pasanda has ground almonds and cream with a milder flavor than a Korma. The other main difference between the two Indian cuisines is that lamb pasanda contains lesser turmeric than a korma which is why it does not look a vibrant yellow like a korma. Pasanda is a word for ‘like’ as its taste is liked by children and adults alike. The creamy white sauce made of mainly yogurt, cream, and cashews is the main appeal of this Indian Food option.

Butter Chicken has represented the Indian Subcontinent in a very vast and pronounced way. Every Indian restaurant includes this Indian non-vegetarian dish on its menu. This bright orange Punjabi dish is thick and has a little heat to it. Usually served with Naan, this creamy dish is famous among foodies. Have a taste of this authentically Indian dish called butter chicken at Little India, Denver, Colorado.

Heavily spiced and with the high heat of Red Indian Chilies, Lamb Vindaloo is made with Lamb prepared with coconut and vinegar alongside hot red chili peppers. With the arrival of the Portuguese, Vindaloo dishes also appeared in Goa. This Goan-origin Indian Dish is the oldest dish that uses chili peppers. Lamb Vindaloo is readily available at Little India. So come and try this hot dish for any out-of-this-world experience.

One of the healthy, zesty Vegetarian Indian dishes is Channa Masala. The Channa masala is an excellent vegan option that goes very well with plain Rice, Jeera Rice, Roti, Poori, Chapati, Parathas, and Naan. This is also another Indian Dish that originated in the region of Punjab. Also known as the Chickpea Curry, the Channa Masala is an Indian Food option made with a hefty masala or curry with boiled Chickpeas or, as the Indian Subcontinent calls ‘Channa’. Generally packed with a kick, this is one Indian Dish with some of the milder chilies which soothe the soul.

The Navratan Korma has nine different ingredients, which are the jewels of the dish; thus, the name ‘Navratan’ means ‘Nine Jewels’. Navratan Korma is cooked in a creamy sauce made of cashews and poppy seeds and served with ice cream. This is a sweet and savory Indian curry dish that is sure to leave you wanting more.

Prawn Pepper Masala is made up of freshly ground masala, including fennel seeds, star anise, curry leaves, and sharp flavors from garlic and pepper. Adding jaggery, tamarind and onions make the Indian dish; Prawn Pepper Masala uses prawns as its main ingredient to bring in the oceanic flavor to the plate.

Cooked in a delicious tomato base, this Indian Cottage Cheese dish shouts the name of Vegetarian dishes in a different light. Paneer Makhani is a Punjabi dish consisting of Paneer, the Indian Cottage Cheese as the main ingredient, cashews, Indian spices, and cream. This super creamy Indian Food option is available in most Indian restaurants in Denver and Little India in Denver, Colorado.

Malai Kofta is a vegetarian Indian dish. Often made with green Bananas or a gourd, the Indian food option tastes like a gravy made of tomato, ranging from mild to spicy. The Kofta balls are fried and dipped further in the delicious mixture of the hot gravy alongside bread or rice. You, too, can taste these amazing vegetarian balls in one of the best Indian Restaurants in Denver, Colorado, known as Little India.

These popular Indian Curries can be found across the country. Little India Restaurant recommends the best type of Indian curry is the Bhindi Masala, as it provides fibers for my body and is an excellent taste on the lips. Try out these popular Indian Curry Dishes that will blow your mind and soothe the soul!