Gulab Jamun – The Sweet encounter with a sweetened fried dough 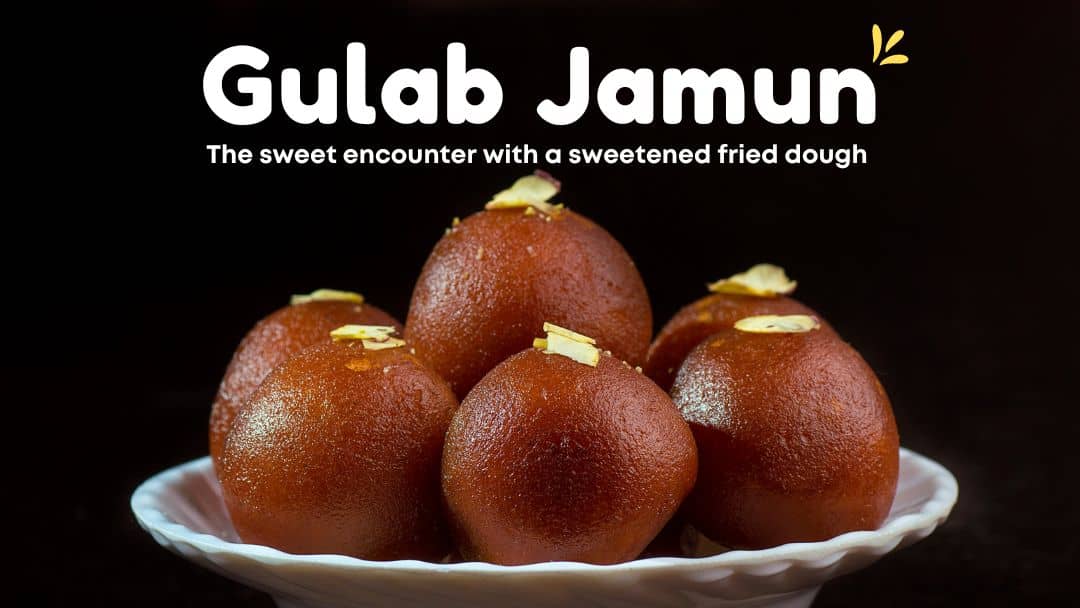 Gulab Jamun – The Sweet encounter with a sweetened fried dough

Gulab Jamun literally translates to Rose as in Gulab and Berry as in Jamun. Gulab Jamun is a sweet confectionary that is soft to the touch, and its texture is like a cloud sponge. Originated in the Indian Subcontinent, this Sweet Indian Dish is known as ‘Mithai’. It is famous in India, Pakistan, Bangladesh, Myanmar, and Nepal. The Maldives is also a big fan of this Indian Sweet, but they call the Indian Sweet Dish ‘Gulab ki Janu’. Many nations with the South Asian populace enjoy Indian Dishes like the sweet Indian Dish, Gulab Jamun. These nations include places like Mauritius, Fiji, Gulf States, the Malay Peninsula, Great Britain, and South Africa, alongside the Caribbean countries – Jamaica, Trinidad and Tobago, Guyana, and Suriname.

Now that we know that numerous people love this Indian Dish, let us learn how it is made! The Indian Sweet Dish incorporates the use of milk solids from khoya. Khoya is made by evaporating milk till getting curdled texted and ending up with milk solids. The traditional khoya extraction from the milk makes the Dish very special and immensely delicious. The reduced milk, khoya, is rolled and tossed until you get a soft dough consistency. The soft rolled dough is then mixed with a good amount of regular flour, also known as ‘maida’ in the Indian subcontinent. The use of baking powder is also initiated for the process. The mixture is then needed, made into small balls, and fried in oil or ghee until golden brown. These fried balls are then instantly dipped in a sweet syrup dip made of sugar and water. After this procedure, you get what’s called ‘Gulab Jamun’. Some people also constitute this with dried milk or powdered milk. The trick here is that even with the soft insides, the slow-cooked and frying motion should cook the inside without making it chewy or frying it too much. The fried balls are soaked in a light sugar syrup flavored with green cardamom and rose water, kewra, or saffron. Hot gulab jamun is often served with vanilla ice cream or Kulfi.

It is said that inspired by a fritter, Luqmat al-qadi was the first one to prepare the Dish in medieval Iran. After that, the Dish traveled to India with Central Asian Turkic conquerors. Another theory states that the Mughal emperor Shah Jahan’s chef made it accidentally. In this Indian Dish for the sweet-toothed, the word ‘Gulab’ was derived from the Persian word ‘gol,’ meaning flower, and the word ‘āb’ meaning water. This was used to refer to the rose water-scented syrup. According to the culinary historian, the Arab desert ‘luqmat al-qadi’ is the most similar desert to Gulab Jamun and might have its roots in a Persian dish, with rose water syrup being a constant in both of the dishes. To experience the true blissful Indian Desert, stop by the best Indian Restaurants like Little India in Denver, Colorado.

In India, Gulab Jamun is a dessert often enjoyed at different occasions, festivities, and birthday celebrations. It is also an excellent way to ‘sweeten the mouth’ during a marriage ceremony, according to the Indians. This Dish does not discriminate between religious beliefs. It is served during Muslim Eid ul-fitr and Eid al-Adha and during Hindu festivals like Diwali and Ganesh Chaturthi. There are various types of Gulab Jamun, and each of its variations has a very distinct taste and appearance. Some of its variants are the black ‘Kala Jamun’, The Bengali ‘Pantua’, The Jabalpuri ‘Katangi’ or say ‘Jhurre Ka Rasgulla’, and the Rajasthani ‘Gulab Jamun ki Sabzi’. Get some of the best Indian Deserts like the Gulab Jamun and other Indian Delicacies at Little India, which serves various Indian Foods in Lakewood, Colorado.