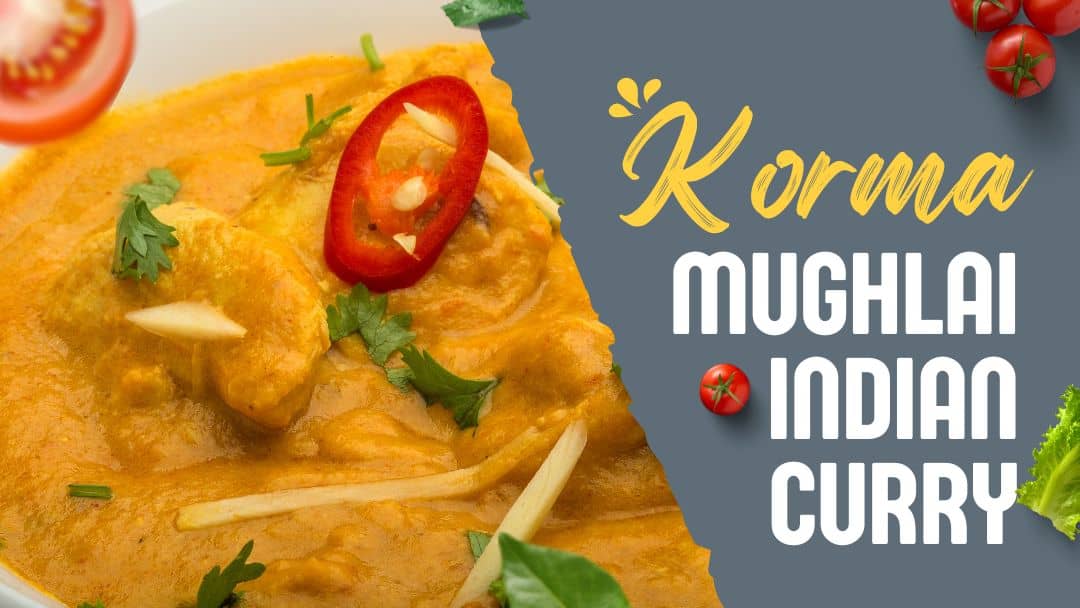 Korma is a type of curry which originated in South Asia. Korma is a Mughlai-inspired cuisine of the Indian Subcontinent. Korma dish can be traced back to the 16th century, which used to be prepared in the Mughal court kitchens. The famous white Korma was garnished with Vark and was also served to Shah Jahan and his guests at the inauguration of the Taj Mahal. Its association with the Historical Royal courts makes the people eating the Indian dish feel special.

Korma is an Indian delicacy in which meat or vegetables are braised with yogurt or stock along with spices that flavor the dish. The mixture of spices including coriander and cumin, combined with yogurt kept below the curdling temperature to incorporate the combination in a slow and gradual process for a flavorful explosion. Traditionally, people used to carry this out in a pot set over a very low flame, with charcoal on the lid to ensure the overall cooking of the dish. A korma could be mildly spiced or it could also be fiery but the smell due to the various spices make it a very wholesome dish. The dish also uses butter and cream to make it mild tasting. This is a good option for those who want zest without the spicy burn like a Vindaloo. The nutty undertone due to the blend of almonds, cashews, coconut, and poppy seeds is a cherry on the cake. The sauce on the other hand also has many aromatic spices that accompany the meat and/or the vegetables.

A Korma can be made with lamb, goat meat, chicken, beef, or chicken. Some kormas also incorporate meat and vegetables like spinach and turnip. The addition of the term ‘Shahi’ (known as ‘Royal’ in English) is sometimes added in front of Korma, making it ‘Shahi Korma’ indicating that the dish is more intricate and has prestige more than an everyday meal. Similar to other Braising techniques, this Indian Cuisine is first cooked briskly, or is seared using high heat, and traditionally incorporated with using ghee. The slow gradual cooking method retains the meat juices and the vegetable juices as well as makes the braised ingredients soft and juicy. During the last stages of the cooking, the pot is sealed with dough and the same ‘dum’ or ‘dampokhtak’ is used.

The Korma then is improvised with a technique called bagar which is the addition of spices, heated ghee, and then further combined with the sauce formed by the braising. The pan is then covered and shaken in order to release the steam and also mix the contents of the Indian dish. The other curry recipes are very different from that of the Korma. Chili and Ginger are also some of the very common spices used in some of the variations of the dish. South Indians also use the Indian Bay Leaves and Dried Coconut to make the Korma more fragrant.

The variations of the Indian Dish, Korma, also has Korma Pilau (pilaf) which is made with rice and braised meat. In the variation from the United Kingdom, the thick Korma Sauce is made with Almonds, Cashews, other nuts, and Coconut or Coconut Milk. In the 21st century, the Korma has been known as the most popular curry in the UK which the people in Uk even more preferred compared to the famous Chicken Masala Tikka.

Navratan Korma is a vegetarian Korma that integrates the use of vegetables and/or paneer. Navratan means nine which indicates the use of nine different vegetables in the dish. While Navratan Korma is widely vegetarian, the Eid Korma is a traditional dish often served during Eid-al-Adha, which is made with lamb, goat, and cow that is braised in very minimal or no spices. The cut of the meat is what dominantly brings the unique flavor. Similar to potted beef, this was done to preserve meat with the help of the fat layers acting as a barrier. In Malaysia, Korma or Gulai Kurma incorporates the dish being cooked with Coconut milk instead of Yoghurt. Meats used for this Korma include Mutton, Chicken, Beef, and/or Deer. Try out the delicious Indian Food Dishes at one of the Best Indian Restaurant in Denver, Little India!