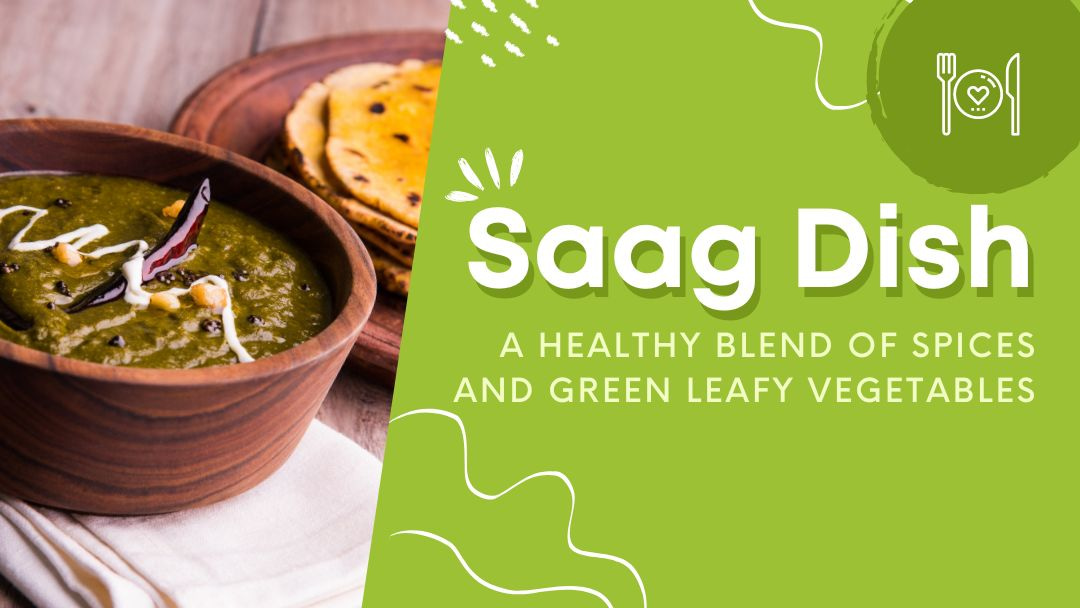 Saag is a dish that globally mainly involves the use of spinach and mustard greens while preparing the dish. In Hindi, the vegetable Spinach is known as saag. It is also known as sag or saga. Saag can also be prepared with other South Asian Leafy Vegetables, like, collard greens, basella, and sometimes also with broccoli. The use of saag has been incorporated in different Indian dishes to bring the enriched flavor of the main dish to the main focus. But when cooked alone with some light spices, the saag can be eaten with various Indian rice dishes or Indian Bread Dishes! The saag has different essential vitamins and fibers that are very good for the body’s digestion.

Saag, in Odisha, is eaten with a fermented rice dish known as pakahla, while in the Shree Jagannath Temple at Puri, saag is one of the Indian Dishes offered to Jagannath as a part of the Mahaprasad. This Indian dish is a simple common dish with various preparation styles in India. In West Bengal and North India, Sardo da saag (Saag Dish made of Leafy Vegetable called ‘Sarso’) and Makki di roti (Maize flour Flat Bread) is quite famous, along with another Indian Saag Dishes like Saag Aloo (Leafy Vegetable and potatoes) and Saag Ghost (Leafy Vegetable and meat). Take-away and restaurants in India also serve the Saag dish as a good side dish, with the main dish being a rice dish or any kind of Indian Bread. Choose the saag dish at Little India Denver to explore the burst of this amazing Indian Dish from any of the best Indian Restaurants in Denver!

In the Odia & the Jharkhandi cuisine, sāga is one of the most important vegetables served as a side dish. It is popular all over these states. Large varieties of plants are used as sāga in Odisha & Jharkhand. A list of the plants that are used as sāga is as below.

The Bengali culture is rich with a special place for their food. In Bengali cuisine, the Indian dish called sāg is one of the most important vegetable side dishes. It is famous all over the state and is enjoyed in most households as it is locally resourced and is, therefore, cheap enough to be afforded by all. Most Bengalis include at least one sāg every day during lunch. They eat sāg fried or with a little gravy (jhol) alongside rice. A list of the plants that are used as sāg is listed below:

Saag paneer is a dish containing paneer, a type of cottage cheese, which is a delicacy considered by the Punjabis.

Saag gosht is a version of the dish prepared with gosht (meat), often lamb or goat. This version of the dish known as saag is also common in Pakistan and meat is also prevalent in the country’s cuisine like that of India. The meat is usually cooked in a tandoor before being marinated in the other ingredients to be made into a whole dish.

Aloo saag (also spelled aalu saag) consists of boiled or fried aloo (potatoes) in a curry made with reduced mustard leaves. It is usually made with mustard leaves in Punjab, although spinach is a common alternative. Saag aloo is commonly served hot, with naan, chapati, makki di roti, etc., and topped with ghee. Punjabis sure love their saag and their dairy products.